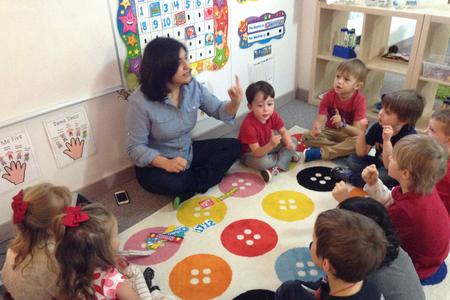 We provide a full immersion Spanish class every day in every class.

We introduce children to the Spanish language through fun activities, games, songs, and crafts. In addition, they learn basic concepts such as days of the week, months of the year, the seasons, numbers, colours, shapes, greetings and more.

Why a second language?

Recent studies indicate that the best time for a child to learn another language is in the first three to four years of life. "During this period and especially the first three years of life, the foundations for thinking, language, vision, attitudes, aptitudes, and other characteristics are laid down," says Ronald Kotulak, author of Inside the Brain. Consequently, it would be a waste not to use a child's natural ability to learn during his or her most vital years, when learning a second language is as easy as learning the first. Since 50 percent of the ability to learn is developed in the first years of life and another 30 percent by age eight, early childhood development programs have the opportunity to encourage early learning and development.

Why Spanish?
Spanish is the 3rd most widely spoken in the world, used by 500 million people, after Mandarin Chinese and English
25 different nations speak Spanish either as the official language or as a primary language.
Learning Spanish is a good choice, particularly because the US and Canada are in the same hemisphere and do business with many Latin American countries.
According to the Calgary Board of Education learning Spanish:
Expands the intellect
Strengthens English literacy skills
Promotes exploration, understanding and appreciation of the cultures of the Spanish-speaking world
Provides students with more choices for advanced education and career options.